If you're a member of a marginalized community and/or are facing financial hardship, you can opt-in for a discount of 40% off by clicking here. No judgment, no questions asked.

October 27 2022: Monster A.I. has been updated to version 2.0. Lots of changes! The rules have been totally rewritten to be clearer and simpler. The monsters are rebalanced to be moderately challenging at levels 1 and 2.

The best kept secret in solo RPGs just got even better!

Monster A.I. is a ruleset for tabletop roleplaying games that allows you to fight monsters that control themselves. Monster A.I. is highly compatible with many tabletop RPGs, and can be hacked to fit your favorite game systems and settings.

Monster A.I. is great for low-prep sessions, solo and GM-less games, and for players who want combat to have the tactical feel of strategy video games like Final Fantasy Tactics and XCOM.

Setting up a combat encounter with Monster A.I. is easy. Simply place a sheet of Monster A.I. schemes in front of the players where everyone can see. Choose some monsters from those schemes or use monsters from one of the suggested encounters. Create a turn order deck with turn cards for those monsters and the players. And finally, populate a battle map with miniatures.

In this product you get the complete rules, a quick reference, an example of play, a guide to programming your own monster A.I., 10 unique A.I.s for the Goblin and Orc factions, suggested encounters for levels 1 and 2, and blank templates for creating your custom A.I.

Here's how it works. In Monster A.I. each monster type has a unique A.I. scheme containing its stats and a list of A.I. behaviors. A monster chooses its actions based on fulfilling the condition tied to that set of actions. A condition can be a special rule such as "If this creature has half or less HP" or "If an ally died this round", or it can be a proximity condition (symbolized by a hex with a number or range of numbers in it). With proximity conditions, we check to see if there are any enemies within a number of spaces written inside the symbol from the monster. When a condition is fulfilled, the monster performs that action. It's a very similar system to one used in the board game Sword and Sorcery.

The second half of the rules are the ones for pathfinding. These were liberally borrowed from (and improved upon) the board game Gloomhaven. Gloomhaven has a robust set of rules that control pathfinding and movement, but that game uses random cards to determine what actions the monster takes. This can make for unpredictable enemies, but the AI tended to be inscrutable and often did some nonsensical things on their turns. Monster A.I. fixes those problems by applying a logical set of A.I. behaviors to the monster's actions.

It's a rather elegant system, and I've included a one-page guide to creating your own monster A.I.s with the rules.

"Monster AI is extremely cool... It's just one of those really sharp ideas that comes at games from a different direction than you usually see." – Bret Gillan (The Final Girl)

"How many nights do we all cancel 'cause someone can't make it? Well, tools like this are how we can play #ttrpgs without even needing other people! I really like this technique and layout of information, it puts it all right in front of you. Def. worth a look" – Natalie Ash (Ember + Ash, So You've Been Thrown Down a Well)

“I’ve been waiting for something like this for ages. Brilliantly designed, easy to use, and applicable in almost any system.” – Dai Shugars (GMDK)

"Yo anyone who ever complains about prep: this is a nifty tool" – Fiona Maeve Geist (Mothership: Dead Planet)

"I like what I see and I want to see more of it... This type of asset could help so many kids and adults that have a strong desire to play TTRPGs but can't defeat their social anxiety." – Deviston (Cobalt Sage Creations)

In order to download this TTRPG Enemy AI Tool you must purchase it at or above the minimum price of $5.99 USD. You will get access to the following files: 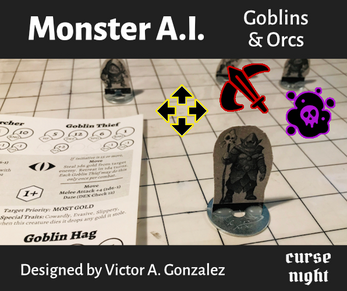 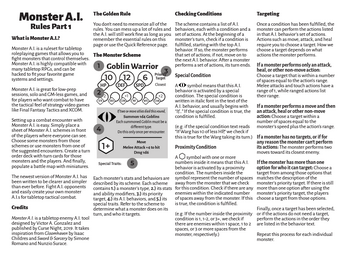 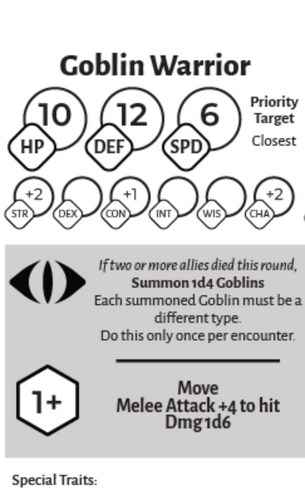 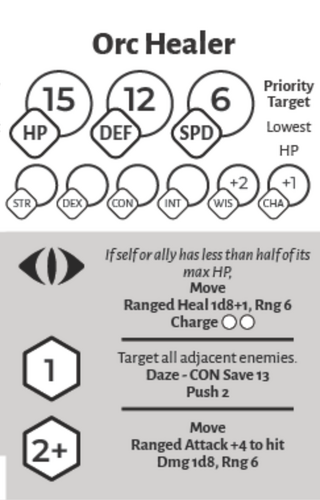